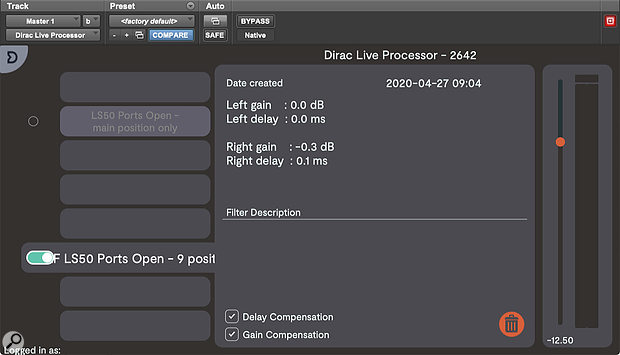 The Dirac Live For Studio plug?in runs on the monitor output channel in your DAW and applies the correction filters that are calculated through the measurement process.

Correcting the frequency response of a monitoring system is one thing, but Dirac claims to correct time-domain response too. Can it possibly work?

Paul Dirac was a British mathematician and physicist who made huge contributions to the theories of quantum mechanics. He served 37 years as the Lucasian Professor of Mathematics at Cambridge University (a?post that both Isaac Newton and Stephen Hawking held), and his 1930 book The Principles Of Quantum Mechanics is still relevant today. Dirac shared the 1933 Nobel Prize for Physics with Erwin Schr?dinger (he of the infamous live/dead cat thought experiment), but is probably best known for his eponymous equation and work on the mathematics of impulse signals.

So why am I telling you all this? Well it perhaps hasn't escaped your notice that the subject of this review is also called Dirac. And that's not a coincidence. The founders of Dirac the company chose the name because Dirac the physicist's work plays a fundamental role in their monitor and room acoustics correction algorithm.

That's the thing about theoretical physics: ideas that, at the time of conception, seem almost beyond the esoteric and of absolutely no practical value can turn out years (or even decades) later to have real-world applications. If you're interested, I've explained, or at least tried to explain, a little about how Dirac's work found its way into a room-correction plug–in in the box.

The Dirac Live 'room correction' system was originally conceived in 2001 by a group of PhD students in the Signals and Systems group at Uppsala University in Sweden. To date, Dirac has been found primarily in the consumer and automotive audio sectors where companies such as Arcam, Focal, NAD, BMW and Volvo have built Dirac functionality into their hardware. Now however, with the launch of the Dirac Live For Studio plug?in, Dirac is joining Sonarworks, ARC and Trinnov in the pro audio room and monitor acoustics correction market.

Live In The Studio

There are three elements to Dirac Live For Studio: two software and one hardware. The hardware element is an omnidirectional measurement mic, and Dirac recommend the MiniDSP UMIK?1 USB from www.minidsp.com/products/acoustic-measurement/umik-1_ as a suitable option, so that's what I used. Other measurement mic options are available, of course, but they need to have an appropriate calibration file; using an uncalibrated mic would be akin to using a ruler with no length scale markings. The UMIK?1 is a USB mic so it connects directly to the Mac or Windows PC running Dirac rather than via an audio interface, although a conventional mic and interface connection option is also available.

The two Dirac software elements are the Dirac Live analysis and EQ filter generation application (this is common with the consumer flavour of Dirac) and the Audio Unit, VST, VST 3 or AAX-format plug?in. They are downloaded and installed separately which, in my case, went very smoothly. Dirac Live requires Windows 10, or Mac OS 10.14 or later. The only slight oddity was that when I opened Pro Tools to look for the Dirac Live plug?in, I found it listed under 'Dynamics'. Dirac Live may be many things, but a compressor it isn't.

On launch, the Dirac Live application searches for a Dirac 'device'. Not being aware of any new device, I found this slightly confusing. However, the application is more normally to be found...

You are reading one of the locked Subscriber-only articles from our latest 5 issues.

You've read 20% of this article for free, so to continue reading...