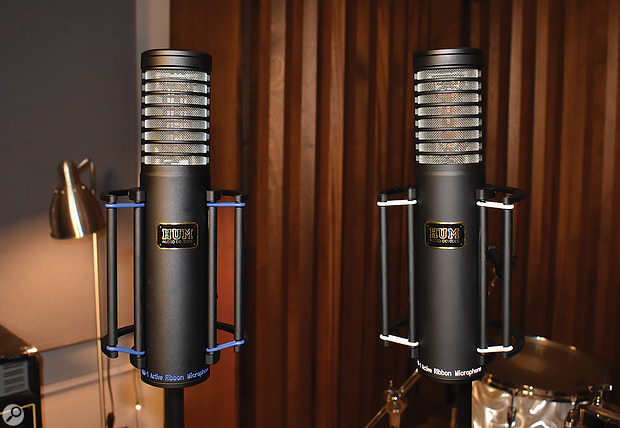 The newest mic from Polish company HUM Audio comes in either long- or short-ribbon varieties. So we tried them both!

HUM Audio seem to like to do things on a rather grandiose level. Over the last few years they have released several products ranging from high-end prosumer loudspeakers, to discrete microphone preamplifiers and their flagship RS?2 stereo ribbon microphone, which was reviewed in SOS October 2017 — see www.codehip.com/reviews/hum-audio-rs-2. The ARM?1 range are essentially mono versions of the RS?2, without all the bells and whistles. The microphones are pitched at the higher end of the market, in the arena of the Royer R122 MkII and Shure KSM353/ED, but are still cheaper than an AEA A440.

I was sent two mics to review, both finished in a slick matte grey and both labelled ARM?1. They look identical apart from the colour of the writing and the cradle suspension O-rings. The blue–coloured microphone is the ARM?1L and is fitted with a two-inch (Long) ribbon. The white–trimmed mic is the ARM?1S and has a one-inch (Short) ribbon. Both microphones are housed in a sturdy aluminium flight case, and they fit snugly into the cut Styrofoam padding. A small cloth dust cover is also included to shield the grille and give some protection to the ribbon element.

The mics come pre-installed in a cradle shockmount, and though the fixed cradle gives up/down and some minimal lateral movement, there were some times when I wished I could swivel the microphone within the cradle (I ended up having to move the mic stand instead, which could be tricky in tighter spaces or when used on a long boom stand above a drum kit). These microphones are very large (280 x 60 mm in diameter), but not overly heavy given their size, so can still be manoeuvred into position fairly easily, although you will need a sturdy boom stand in order to position them as drum overheads without drooping. You really wouldn't want to take any chances with the price tag on these!

From the specs, the longer ribbon seems to exhibit a slightly fuller low–frequency response below around 100Hz, and has a touch more presence in the upper-mids around 6-10 kHz. These are active ribbon microphones and work on +48V phantom power, giving output levels comparable to the average capacitor mic and making preamp choice much less critical. The microphone specifications state a fairly typical ribbon frequency response of ±3dB from 30Hz-14kHz for the ARM?1L and 40-14 kHz for the ARM?1S. Each mic has a three-way switch located on the base near the XLR socket, giving a selection of flat response, or a low cut at 50 or 100 Hz.

Over three drum recording sessions I was able to use both ARM?1s in various positions around a kit. Using the pair as drum overheads it was apparent straight away that these are great microphones — full and rich in the low and low-mid regions, as you would expect from a ribbon, with smooth upper-mids and highs resulting in a pleasant cymbal sound. Using a high shelf EQ to open the sound up a little worked very well without the sound becoming harsh or brittle.

Next up, I tried the ARM?1L as a centre overhead, in conjunction with two spaced AKG C414 ULSs. This is one of my favourite overhead techniques: the centre ribbon is placed over the drummer's head, looking at the snare, where it picks up a good overall balance of the drums, while the darkness of the ribbon helps to add weight to the drums without overly accentuating the cymbals. It also helps to firm up the drum sound in mono. The ARM?1L really worked nicely here. The subtle upper-mid presence gave a nice bite to the snare and cymbals without harshness. It worked well with the bright condensers, as you can hear in the hi-res audio examples I've prepared in the Zip file (see 'Audio Examples' box).

I then tried using them as drum room mics, placed low down, about a foot from the floor and three feet in front of the drum kit. The 'null' of the figure?8 patterns were pointed at the kit in order to capture the room reflections rather than the direct sound. The slightly fuller low end from the 1L seemed to pull the kick upfront, and the lift in the upper–mids gave the snare a nice presence. However, the 1S shined for this particular track, sounding natural and flat, neither hyped nor accentuated in any way, but rather giving a true representation of the kit in the room.

It was apparent straight away that these are great microphones...

I love the sound of ribbons for strummed acoustic guitar and will often pair one with a small–diaphragm condenser to capture the detail, with the ribbon providing a warm smooth low end. In this application the ARM?1s did not disappoint. I paired them with an AKG C451, all placed about 1.5 feet away, pointing at around the sixth fret. The ARM?1L just pipped the 1S for me here: its slight mid–range presence complemented the brightness of the 451, and the slight low-end extension seemed to further round out the low frequencies.

The proximity effect exhibited by ribbon mics can really accentuate boominess in an acoustic guitar, meaning that the sweet spot is often a couple of feet back. At longer distances ribbon microphones can often need a lot of gain to achieve usable levels. However, at this distance, both the ARM?1s only needed around 30dB of gain for a suitable signal. The low–frequency roll-off was great in this application and is a feature that I have not come across on ribbon mics before. It enabled the proximity effect to be tamed slightly, meaning that the mic could be placed slightly closer, yielding a little extra detail.

Finally I turned to the ARM?1L when recording some trumpet sections. Brass can sometimes sound a little thin and spiky, but the proximity effect and darker sound of ribbons can be used to great advantage here, and the 1L sounded great! Full, rich and smooth across the low frequencies with just enough presence and raspiness to fit perfectly into the track.

There is no doubt these are very nice microphones. Both models sound warm and smooth, as you would hope from a ribbon costing nearly ￡$2000. I found that I was more drawn to the ARM?1L over the test period. Its slight extra presence was pleasant to my ears on most sources. These are both great microphones, but you will need very deep pockets to even consider buying one of these. However, if you are in the market for a premium ribbon microphone with a girth that matches its sound, it would be well worth trying one of these.

I've created multiple audio examples so that you can hear these ribbon microphones in action for yourself.

Stream them using the SoundCloud player below, but for critical listening, you'll have a much better experience if you download the Zip file of uncompressed WAV versions and audition them in your?DAW.

These microphones are expensive, so won't be for everyone, and they're also on the large side, meaning it can be tricky to manoeuvre them into tight spaces — but they are great–sounding microphones! The adjustable roll-off is a nice touch too, and enables the proximity effect to be tamed as desired.