Sending MIDI From Reason To Live Skip to main content

Sending MIDI From Reason To Live 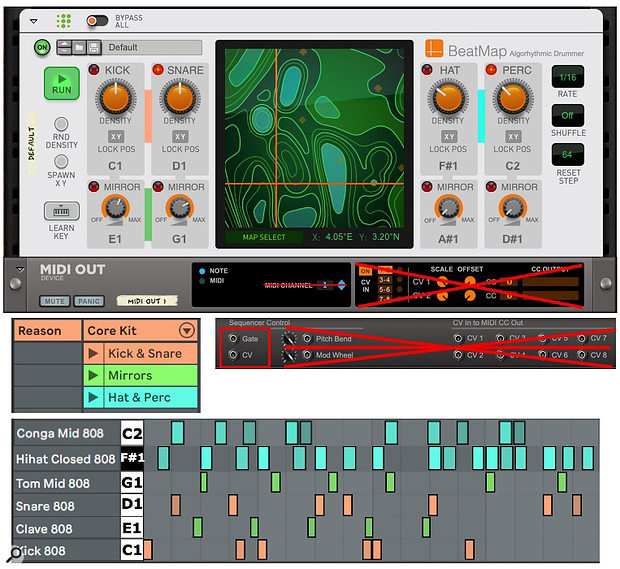 Screen 1: The six kit-piece pattern shown at the bottom was generated by the Beat Map settings shown above and sent to Live using the MIDI Out. device.

When we covered the Reason?11 VST3 plug?in in the December 2019 Live Tech column, I mentioned that Reason could not send MIDI data to Live. Apparently other folks noticed that too, because this was one of the most requested features, and so it has been implemented in Reason 11.2. In addition, the new version lets you drag MIDI clips into Live from three of Reason's MIDI-based devices: the Redrum drum machine, the Matrix step sequencer and the Dr Octo Rex Rex-file player.

Earlier versions of Reason offered an instrument device called the External MIDI Instrument for routing MIDI from Reason to the outside world, but it was not available in the plug?in version of Reason 11. A new Reason instrument called MIDI Out now replaces External MIDI Instrument and is included in the Reason plug?in. In the VST3 version it will send out MIDI note messages on any MIDI channel as well as MIDI control-change messages. Live does not sort MIDI messages by channel and, as of now, also does not receive CC messages from the MIDI Out device. Nevertheless, for Live users MIDI Out is an incredibly useful addition to the Reason kit.

Like any Reason instrument, MIDI Out has Gate and CV inputs for gating notes and setting their pitch. (These are the only...

You are reading one of the locked Subscriber-only articles from our latest 5 issues.

You've read 20% of this article for free, so to continue reading...